Walk along the route of the proposed EastMed pipeline to see how gas is fueling climate change, militarisation and oppression in the Eastern Mediterranean region.

What is “EastMed”?
A mega pipeline that would carry fossil gas from the disputed waters of the Levantine Basin (Cyprus, Israel and potentially Palestine) to Italy.
It would be one of Europe’s longest pipelines, and, reportedly, the world’s deepest. But we still have time to stop it. 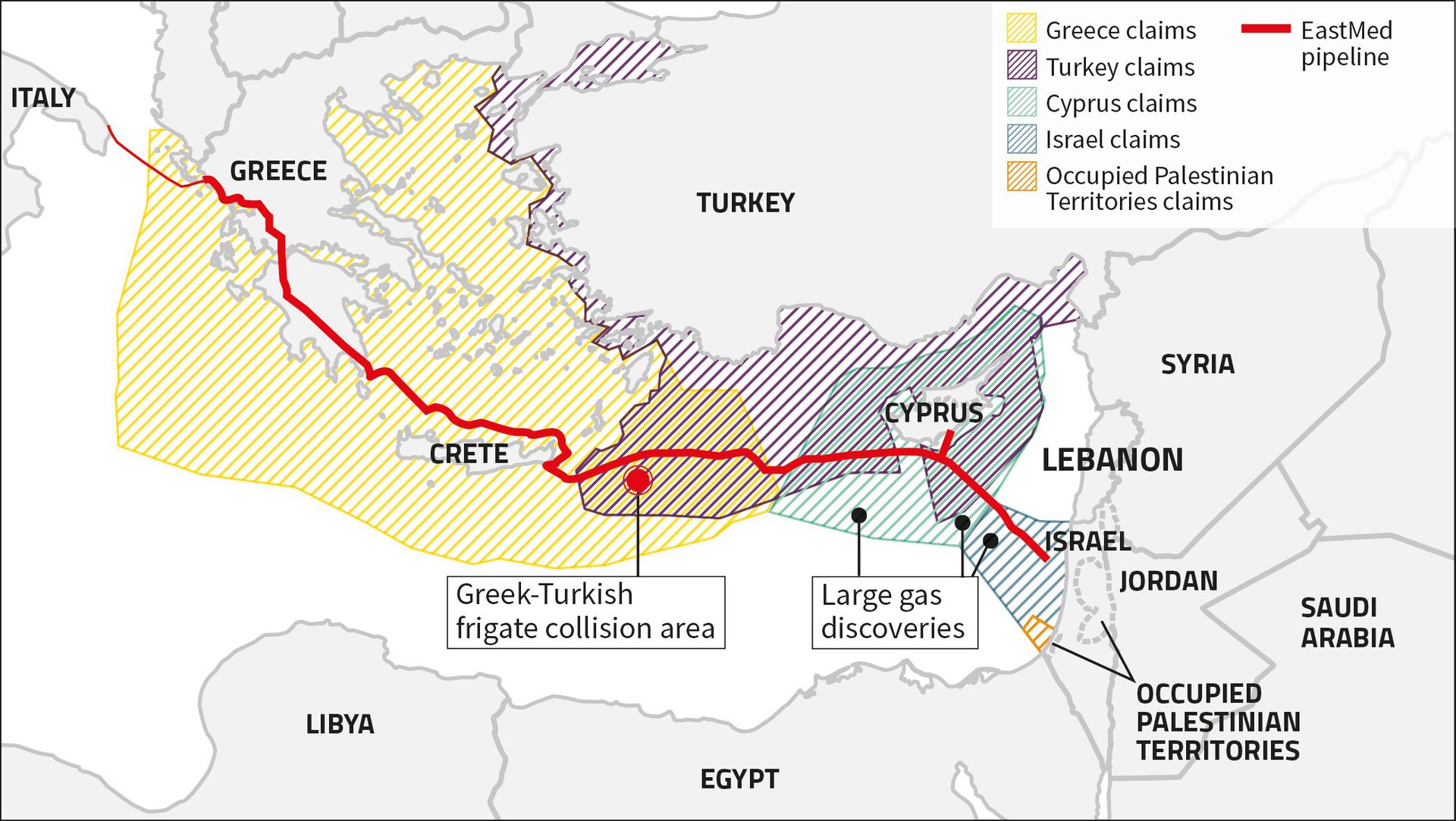 ISRAEL
The EastMed pipeline begins in Israel.
The Israeli government is one of the most enthusiastic proponents of the EastMed pipeline, as it would secure a European export market for Israeli gas reserves.
The pipeline amplifies the ongoing injustice between Israel and Palestine, by strengthening the Israeli regime economically and politically.
The Israeli regime does not allow Palestine to exploit their gas reserves in order to reduce their economic and political power. This directly infringes on the right of Palestinians to manage their own natural reserves. Following pressure from the Israeli government, companies, such as Shell, who have licenses awarded by the Palestinian Authority in the waters off Gaza, have abandoned operations.
CYPRUS
The EastMed continues from Israel to Cyprus, where important offshore gas reserves are located.
The island is split into two zones with military borders : the Northern part (Turkish Cypriot community) and the Republic of Cyprus in the south (Greek Cypriot community, the Republic of Cyprus).
In 2011, Turkey signed a deal with leaders in Northern Cyprus that gave Turkey permission to drill in the region. This permission is not recognised by the Republic of Cyprus. Since, Turkey has been sending exploration and drilling ships in disputed Cypriot waters.
In September 2020, over 60 organisations from Turkey, Greece and Cyprus came together to demand an end to extraction in the region, for climate justice and for peace.
US Interference
The US is interfering with the geopolitical dynamics in the region, fossil fuel development and militarization; as it does all over the world.
The US congress passed a bill that supports the Eastmed pipeline, with a promise of US assistance for fossil gas extraction offshore Cyprus and Israel, and a US run Energy Center in the region.
The same bill also lifts a 1978 embargo on selling arms to Cyprus, which was put in place to de-escalate conflict with Turkey.
Exxon Mobil (who holds the exploration blocks offshore Cyprus) heavily lobbied for the bill to pass.
Greece
Moving along the pipeline, you arrive in Greece - which is enthusiastically supporting the EastMed pipeline.
Turkey and Greece have a number of historic overlapping claims over maritime territory. In November 2019, Turkey signed an agreement with the Libyan government that gives it access to a portion of what Greece considers to be its own exclusive economic zone.
Tensions rose in summer 2020, when Turkey sent a gas exploration vessel escorted by warships in a disputed maritime zone. The situation escalated and a Turkish warship collided with a Greek warship.
Italy
The last leg of the pipeline (named Poseidon) connects Greece to Italy, and links the pipeline to the European gas network.
Italy is less vocal in supporting the EastMed pipeline, however, its economic interests talk for themselves.
The promoter of the EastMed pipeline, company IGI-Poseidon is a joint venture between the Greek DEPA and Edison, an Italian subsidiary of EDF.
Eni, the largest italian fossil corporation, has interests across the eastern mediterranean gas fields - and is a key player in Cyprus.
European Union
The EU is providing significant political and financial support to the EastMed project.
The EastMed has received priority status by being included in the latest Projects of Common Interest (PCI) list, which means that the pipeline can skip regulatory hurdles, receive financial support, and is considered top EU priority.
The EastMed pipeline is part of the EU’s huge and rapid push for new fossil gas import terminals and pipelines.
This push is however totally misaligned with EU climate targets and citizens expectations.